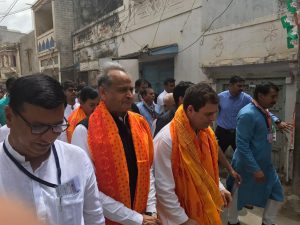 Addressing the party workers at Dwarka, he said that traders are facing difficulties due to hurriedly implementation of GST. He said that economy is paralyzed and youths are not getting employment in present government. He also alleged that farmers are not getting right prices of their farm produces.

Criticizing the BJP rule in Gujarat, Congress Vice President said that state Government is working for few big industrialists only. He said that, if Congress voted to power in the state it would be the Government of farmers, poor people and youths.

Gehlot shared some glimpse of Rahul’s visit on his Twitter handle with a caption : “With #RahulGandhi ji… offered prayers at Dwarkadhish Temple, before embarking on the three-day long Navsarjan Yatra. #RahulInGujarat.”

After completing his Gujarat visit, Gandhi is scheduled to visit Mathura, a famous Hindu pilgrimage in Uttar Pradesh, to participate in a farmer’s rally.

Meanwhile, political pundits take a buzz that the Congress Vice President has adopted a new strategy of visiting temples and pilgrim places to woo the Hindu voters and revamp the Congress party across the nation.