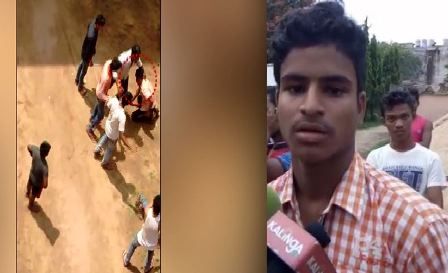 Cuttack: Ravenshaw University was in the news for the wrong reason again after a video of a student allegedly being ragged and beaten up by some other students went viral on Monday.

According to reports, Biswajit Mohanty, a Plus Two second year student, was beaten up by Subhrajit Roy, a BBA student, near Lalitgiri Hostel.

Speaking exclusively to Kalinga TV, Mohanty said, “Earlier, I was threatened by them several times. I had gone to the University on my bicycle to get my +3 merit list. They blocked me on the way and took me to the Lalitgiri Hostel and made me kneel down. One of them – Subhrajit Roy – beat me up.”

“If students are facing ragging in one of the top institutes of the state, one could imagine what must be happening in other colleges. I demand exemplary action against Subhrajit,” the victim added.

In the 50 second video, eight students are seen forcing the victim to kneel down and hitting him.

The Vice-Chancellor of Ravenshaw University, one of the oldest educational institutes in the country, Prakash Sarangi refuted the incident and said it could be a case of violence between two student groups.

Sarangi also assured to take appropriate action in connection with the incident if he receives a formal complaint.