Puri all set for Ratha Jatra 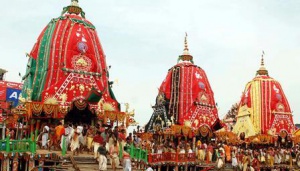 Puri: The pilgrim town of Odihsa is all set for the annual Ratha Jatra of Lord Jagannath and his siblings scheduled to be held tomorrow.

Despite rains, lakhs of devotees arrived in Puri and turned the Chariots of the deities southward.

They pulled the majestic chariots – Nandighosa (Lord Jagannath), Taladhwaja (Balabhadra) and Darpadalan (Subhadra) to Singha Dwara ahead of the grand festival tomorrow.

Around 10 lakh people from around the world are likely to attend the festival.

A total of 127 platoons of police force, under the leadership of 646 Sub-inspectors, will be deployed for maintenance of law and order during the world famous Car festival.

Twelve SPs, 32 Additional SPs, 68 DSP and 136 Inspectors will also be deployed for the event.

Moreover, two units each of Rapid Action Forces, SOG and ODRAF will be pressed into service.

Likewise, three teams of Odisha Swift Action Force (OSAF), a newly raised force, will be deployed by the state police for better crowd control during the car festival.