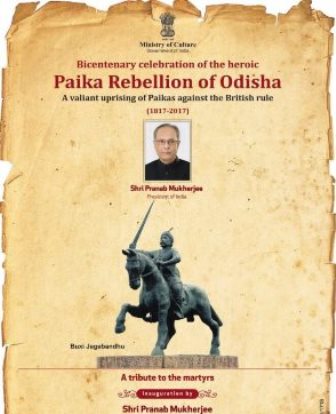 The President will inaugurate the bicentenary commemoration day of the historic rebellion in the presence of Chief Minister Naveen Patnaik, Union Ministers Dharmendra Pradhan, Jual Oram and Mahesh Sharma at 6.15 PM.

President Mukherjee is scheduled to felicitate 150 Paika descendants at the function. The Paikas will also showcase their martial skills.

On this occasion, a memorandum seeking declaration of the Paika Rebellion (1817) as the first war of Independence will be handed over to the President.

BJD MLAs today left for the National Capital to attend the function.

Patnaik had written to Union Home Minister Rajnath Singh in this regard yesterday. “The Paika Rebellion (1817 AD) of Odisha, which took place 40 years before the Sepoy Mutiny (1857 AD) eminently qualifies to be called as the ‘First War of Independence’ not simply because it took place four decades prior to the Sepoy Mutiny, but due to its very nature and characteristic features,” the CM had mentioned in the letter.

The Odisha Cabinet had also on Tuesday requested the Union Government to accord the First War of Independence tag on the Paika rebellion.