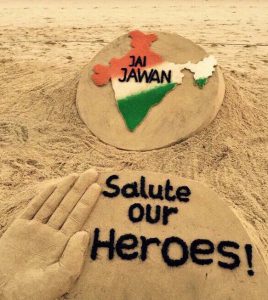 New Delhi: President Ram Nath Kovind on Wednesday saluted the martyrs and their families for their sacrifice on the occasion of Kargil Vijay Diwas. In a tweet, Kovind said the nation is grateful to the brave men and women of armed forces who keep the country safe and secure.

Kargil Vijay Diwas is celebrated on July 26 to commemorate India’s emphatic victory against Pakistan in the Kargil war and honour the war heroes. On this day in 1999, the Indian Army successfully took control of posts at a treacherous high altitude and glaciated terrain across the Himalayas in the Ladakh region of Jammu and Kashmir, after fighting for 60 days.

More than 500 soldiers from Indian Armed Forces sacrificed their lives during the Kargil war.