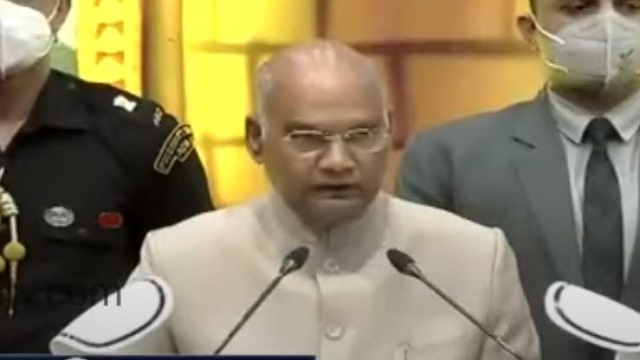 Rourkela: President Ram Nath Kovind on Sunday said that the name and meaning of Rourkela are quite inspiring. While addressing the gathering after inaugurating the Super Speciality Hospital in the Steel City, he explained the real meaning of ‘Rourkela’ City.

While speaking about the Super Speciality Hospital, the President said that Prime Minister Narendra Modi around six years ago had announced to upgrade the Ispat General Hospital (IGH) to Super Speciality Hospital and I am very happy that the Prime Minister’s dream has been fulfilled with the joint initiative of the Ministry of Coal and Steel Authority Of India Ltd (SAIL).

“I thank each and everyone who contributed to the up-gradation of the hospital directly or indirectly. Not only the people of Odisha, but also people from the neighbouring states like Jharkhand and Chhattisgarh would get the benefit,” he added.

He further said that good governance is always based on two pillars. They are health care and education. Both have been contributed to the development of humanity.

While recalling the contribution of the health staff, the President said that the nation will always be in debt to all the health workers who gave their lives while fighting against COVID-19.

“Odisha, which is contributing to the economic development of the country, is well known for its prosperous heritage and proud glorious history. Even Ashoka, the Great, learned the value of Ahimsa (Non-Violence) from here,” he said.

The President further said, “Odisha has produced several international Hockey players. Four women from the State represented the country in the Rio Olympic-2016. Odisha is the first state to sponsor Indian Hockey teams, which is why it will host the 2023 Men’s Hockey World Cup and the largest hockey stadium will be set up in Rourkela.”

Prior to inaugurating the Super Speciality Hospital, the President attended the 18th annual convocation of NIT Rourkela.

He is slated to visit Konark and Puri tomorrow before departing to Delhi at 5.20 PM.