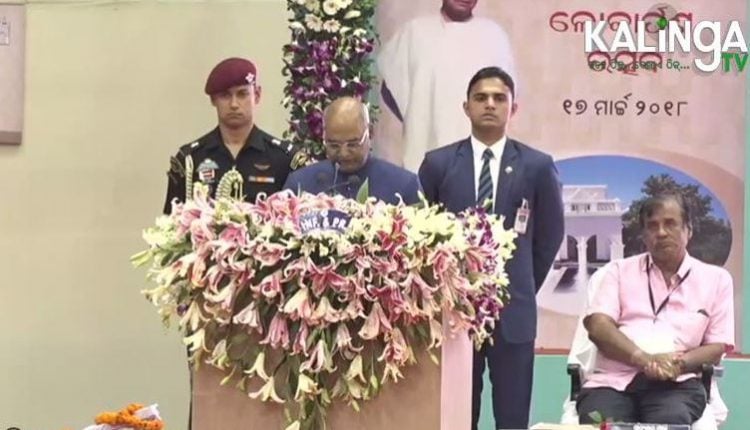 Cuttack: President Ram Nath Kovind on Saturday praised legendary leader and former Odisha Chief Minister Biju Patnaik for his outstanding contribution for the motherland, while he was addressing the public after dedicating the Anand Bhawan Museum and Learning Centre to the people here in Odisha.

“I feel proud to inaugurate the Anand Bhawan Museum and Learning Centre in my maiden visit to Odisha after becoming the President of India,” Kovind said.

“During the freedom struggle, there were two Anand Bhawans in India- one in Allahabad and the other is in Cuttack. Both were strategic centre for the freedom movement,” he added.

I wish, the Museum will cherish Biju Babu’s legacy and help the tourists to know about the crucial period of Indian history, particularly the freedom movement,” the President said.

Hailing Biju Babu, the President said that Biju Patnaik’s legacy is above party politics and not only Odisha but all of India is proud of him.

#PresidentKovind dedicates 'Anand Bhawan Museum and Learning Centre', the ancestral house of the late Biju Patnaik, to people of the state; says Biju Patnaik's legacy is above party politics and not only Odisha but all of India is proud of him pic.twitter.com/sI6aQicaGZ

The President , who arrived at Biju Patnaik International Airport in Bhubaneswar at around 10:30 AM,  also saluted one of India’s most celebrated freedom fighters Subhas Chandra Bose for his role in the freedom struggle of India .

He also remembered Utkal Gaurab Madhusudan Das, one of the greatest pioneers of modern Odisha, on this occasion.