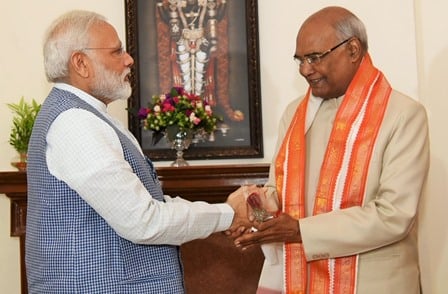 New Delhi: In his maiden speech after being elected the 14th President of India, Ramnath Kovind on Thursday hailed the greatness of Indian democracy.

“My election as the president is evidence of the greatness of Indian democracy,” Kovind said. “I had never aspired to be the President of India; my win is a message to those discharging their duties with integrity.”

The President-elect said he had never thought he would ever become President but will carry out his duties with pride.

Kovind paid tribute to the farmers, the oppressed and the poor of the country. He also extended his gratitude to the lawmakers and people of the country who supported him in the Presidential poll.

“I thank all those who supported me from across country, I feel very emotional,” he said. “I will represent all struggling to make a living”.

Kovind finished off his speech promising to be a loyal servant of the country. He will be sworn in as the 14th President of India on July 25.