Pregnant woman carried in sling to hospital in Odisha again 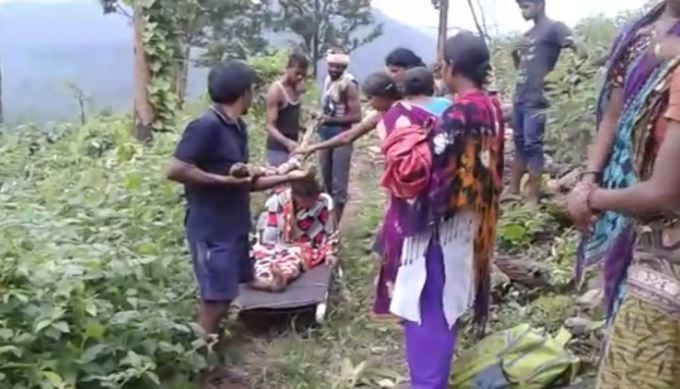 Phulbani: In yet another case presenting the gloomy picture of the healthcare facility in remote patches of Odisha, family members of a pregnant woman in Daringbadi block of Kandhamal district have carried her in a sling to hospital due to unavailability of ambulance yesterday.

As per the report, the victim woman identified as Mikanti Majhi, wife of Nikdam Majhi of Duburi village under Tajungiya panchayat reported labour pain last night and needed immediate shifting to hospital. While her family members called up 108 ambulance for assistance, it failed to reach the village due to lack of motorable road.

Finding no other option left, Mikanti’s family members carried her in a sling to a nearby hospital. But due to the wretched condition of the road in the village the victim delivered a baby girl after being carried around 3 kilometres in a sling.

After delivery, the woman was to again carried to one and a half kilometres more to get access to a hospital.

Locals in Duburi village have expressed their discontentment over the issue and alleged repeated appeal to the district administration to upgrade the road connectivity, to the area have gone on deaf ears.

Also Read: Elderly Tourist Critical After Being Hit By Car In Keonjhar

Elderly tourist critical after being hit by car in Keonjhar