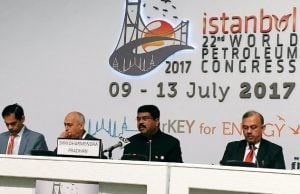 Pradhan also chaired a Plenary Session on ‘Supply and Demand Challenges for Oil, Gas and Products’ at the international Congress.

Addressing the plenary session, Pradhan said that the rising middle class of emerging Asian countries like India will drive the demand for energy both in terms of electricity and cooking and transportation fuel.

“As incomes rise, demand for petrochemicals, the raw materials for several of the lifestyle products, will also increase. Giving example of India, he said that the energy consumption is expected to grow almost double by 2035”, the Minister stated. “India is the only country where the demand will continue to rise for more than a decade”.

Pradhan further said, “India is the third largest consumer of oil and petroleum products in the world. At present, India imports about 80% of its total oil and gas requirement. We need to cut down this number by increasing our production substantially. Prime Minister has given a target of reducing import dependence by 10% by 2022 and we are working towards that.”

The Minister also held bilateral talks with Turkish Energy Minister Berat Albayrak at the sidelines of the WPC during which issues of bilateral energy cooperation including in renewable energy were discussed.

The two Ministers agreed to work together in areas like exploration & production ( E&P) of oil and gas sectors in the coming days.

Later, the Minister launched an event on Hydrocarbon Exploration & Licensing Policy (HELP) as part of process of promoting the upcoming oil & gas bidding rounds in India.

Dine & Wine as you flip through books at this café

Kovind to dine with Naveen during Odisha visit