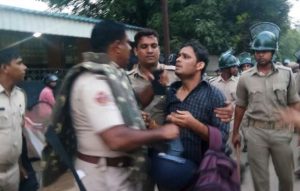 Bhubaneswar: Sikshya Sahayak aspirants on Monday clashed with the security personnel here, while they were agitating to press their demands including recruitment of Sikshya Sahayaks across the state.

A large numbers of aspirants, including women candidates, have been injured when police resorted to lathi-charge at Lower PMG here to disperse the agitating aspirants.

Meanwhile, as many as 15 agitators were arrested following the incident.

Notably, the State Government had issued a notice for the recruitment of as many as 14087 Sikshya Sahayak posts across the state in 2016. However the recruitment process was put on hold as the matter was in sub judice.

However, the Orissa High Court, while exercising its final verdict on 23rd October, 2017, directed the State Government to expedite the said recruitment process at the earliest.