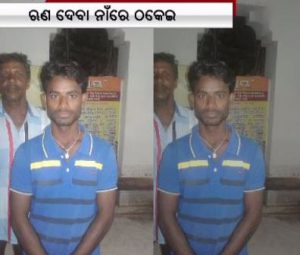 Balasore: Police raided a fraudulent finance company and arrested seven persons in Sanakumari village under Khaira block of the district today. The company had duped job card holders of lakhs of rupees with a promise to provide them loans.

The arrested persons have been identified as Anjan Kumar Jena of Mundahata, Antaryami Rout of Khanpur, Baburam Das of Teldia along with Paramanand Mallik, Sarat Kumar Parida, Bikram Sahu, and Suryamani Sahu of Bhadrak.

Khaira Police Station IIC Lopamudra Nayak said the company was collecting Rs 200 from each loan seeker against their job cards on the pretext of sanctioning them a loan of Rs 42,000 to set up cattle sheds and dairy firms. The police acted after some loan seekers filed a complaint against the company recently for failing to keep its promise.

Nayak informed that the company had cheated around 2000 loan seekers in Khaira block in Balasore district and an equal number of people in neighbouring Bhadrak district.

Police have launched a manhunt to nab the absconding owner of the company Rabi Narayan Das and five others.