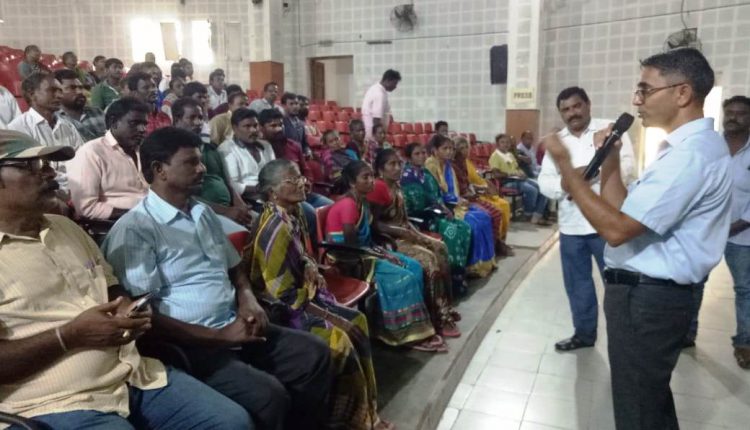 Puri:  With an aim to make Puri sea beach and its surroundings clean and more tourist-friendly, the District Administration has set a target to make Penthakata, the fishermen’s colony along the coast open-defecation free by October 2.

The decision was taken today during a meeting headed by District Magistrate-cum-Collector, Balwant Singh, IAS as part of ‘Mo Beach’ campaign.

The District Administration has urged the residents of Penthakata village to actively participate in the drive to make the beachside area garbage free, especially free from open defecation in order to maintain hygiene in the area.

Nine community leaders were chosen among the fishermen community in order to monitor the clean-up drives and asked to submit a report on how many households lack toilets. Upon receiving reports, they will be provided financial assistance to build toilets as per the Government guidelines.

The fishermen were also asked to segregate the waste in the initial fifteen days and then directly dump into the garbage lifting vehicles of the Municipality every day.

“It’s a great necessity to keep the beaches clean as it’s the source of livelihood for many people like photographers, vendors and others involved with the tourism industry,” said Puri Collector.

Notably, the volunteers and Municipality workers have been relentlessly engaged in cleaning the seashore near Penthakata area along the coast since Wednesday. Nearly 200 volunteers from different sections like Self Help Groups (SHGs), Hotel Association, Beach Photographers’ Association, NGOs, among others had removed piles of garbage on the beach and cleared a few encroachments.

The Collector also appeals tourists and people not to throw plastic cups and bottles, aluminium cans on the beach as it will cause irreversible damage to the whole ecosystem.

Besides, the Puri beach is among the eleven beaches which have been selected to get the Blue Flag certification, a tag is given to environment-friendly and clean beaches which are equipped with amenities of international standards for tourists.