Patita Pabana Bana, the main flag is completely out of danger 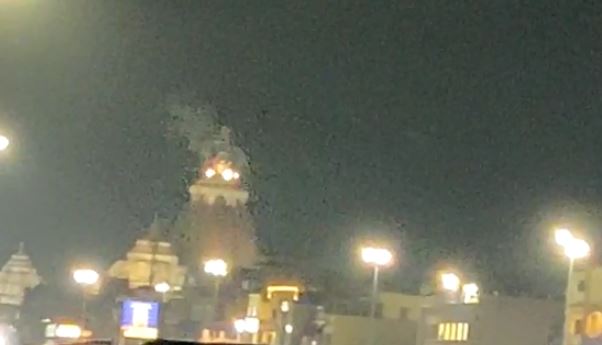 Puri:  A few small flags atop the Srimandira in Puri of Odisha caught fire on Thursday. Today is Papamochani Ekdasi. Reportedly,  lamps had been placed atop the temple on the occasion of Ekadasi today which caught fire due to the gusty winds.

Importantly, the Patita Pabana Bana, the main flag fixed on the pinnacle of the temple has not caught fire and completely out of danger. As per the locals, the flags that caught fire were the small flags locally called ‘Manasika’ flags.

However, as per devotees, this is an indication by Lord Jagannath, the Lord of the Universe about coming up of a hazard.

Flags are fixed atop the famous temple and height of Puri temple is 214 feet. Hence, nobody can see from a close distance anything that happens atop  the temple. However, we can see fire atop the temple as seen in the video. However, what was witnessed from far distance was a few lamps were been placed near the Nila Chakra from where the flag might have caught fire.