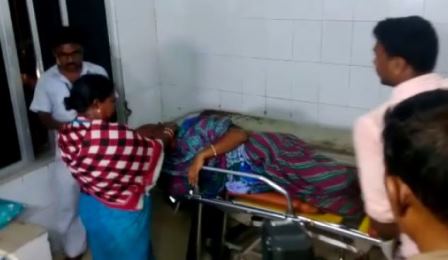 Angul: In a shocking incident, a patient’s kin jumped off a moving ambulance after the staff attempted to rape her near Phulapada Square under Banarpal police limits in the strict yesterday evening.

According to reports, a 20-year-old woman from Kushakila village under Jarapada police limits was returning home in the ambulance after admitting her elder sister to a private hospital in Cuttack.

After travelling till Phulapada Square in Angul district, the driver of the ambulance tried to rape the woman in the running ambulance. In order to escape, she jumped from the ambulance and got critically injured.

On being alerted, some locals rescued her and admitted her to the District Headquarters Hospital, where she is still undergoing treatment.

When the news spread, some other villagers intercepted the speeding private vehicle near Cheliapada Square and vandalised the vehicle. They also beat the driver of the emergency service black and blue before the local police came to his rescue.