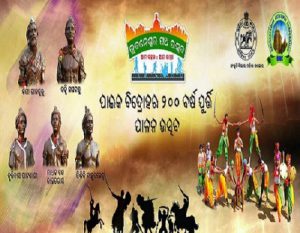 Bhubaneswar: With Odisha observing the 200 years of ‘Paika Rebellion’ with a sense of pride, the ‘Ptah Utsav’ in Bhubaneswar this Sunday will showcase a host of cultural programmes to commemorate this glorious chapter of Odia history.

The decision to showcase various presentations on the ‘Paika Rebellion’ during the upcoming edition of this signature event scheduled for tomorrow was taken by the Bhubaneswar Municipal Corporation (BMC), which jointly organizes ‘Patha Utsav’ with Bhubaneswar Development Authority (BDA).

While the State Culture Department has planned various dance and musical programmes on the Paikas of Khurda, several groups of this warrior class would hold a ‘Paika Akhada’ (warrior gymnasium) to entertain people. Traditional Paika dance would also be presented before the crowd on the occasion.

A fancy dress competition would also be held during the event in which the participants would be seen donning Paika attire.

The organizers of the Patha Utsav have said the Paika theme for the event this week has been chosen to pay respect to our brave soldiers of independence and have appealed to the people to take part in it in large numbers.