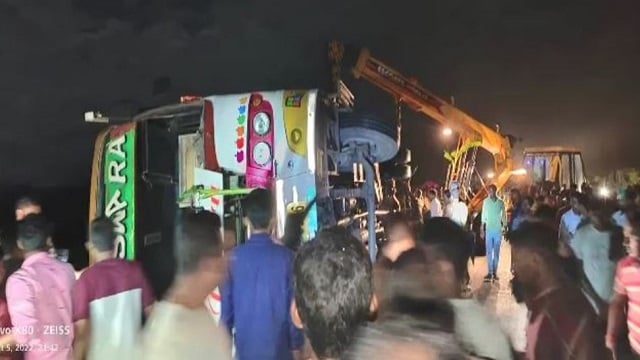 Nayagarh: In a tragic accident, one person died and over 10 passengers sustained injuries as the passenger bus carrying them overturned mid-way at Daspalla area of Nayagarh district on Wednesday. The incident occurred while the passenger bus ‘Kaleswar’ was en route to Nayagarh from Bhanjanagar in Ganjam district. The vehicle turned turtle after the driver lost balance on the wheels near Gudibida area.

According to reports, the cause of the accident might have been the slippery roads as it was raining heavily in Nayagarh district.

40 passengers narrowly escape as bus skids off road in…

The deceased has been identified as Kalyani Panda, Manager of Odisha Gramya Bank (OGB), Daspalla branch. The people who had sustained injuries have been admitted to Daspalla community health centre (CHC).

Reportedly, the driver of the bus is in critical condition as well.

The local police along with fire brigade personnel has rushed to the spot and started the rescue operation.