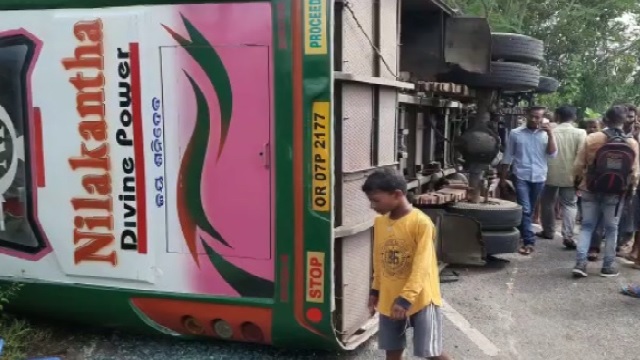 Ganjam: In a tragic road accident, a passenger bus turned turtle near Kulangi village on Sorada-Bhanjanagar road in Ganjam district this morning in which seven people are critical and 40 people have sustained injuries.

Reportedly, the passenger bus, bearing registration number OR 72P 2177, carrying 50 farmers was en-route to Agricultural Service Center, Bhanjangar from Goudagotha for KBK training. Following this, a bike, suddenly, came in front of the bus due to which the driver had to apply sudden break. As a result, the passenger bus overturned on the road.

The locals immediately informed to the local police and 108 emergency ambulance. On getting the information they arrived at the spot and rescued the passengers.

As many as 40 passengers have sustained injuries and seven are in a critical condition. All of them were rushed to local hospitals of Bhanjanagar and Sorada for immediate medical treatment.

In another fatal road accident, a person died after his bike was hit by a truck on National Highway 16 near Talanagar village in Balasore on Wednesday night. The deceased has been identified as Madhusudan Puhan, a resident of Eram in Basudevpur block of Bhadrak district.

The accident took place when he was en-route to his in-laws’ house at Sarupada village in Balasore. On being informed, Soro Police reached the spot and has sent the body for post-mortem. The officials have initiated an investigation into the matter.

Similarly, a bus driver killed after being hit by an auto-rickshaw near Chudangapur in Ganjam. Three passengers and the auto-rickshaw driver have sustained injuries.