Bhubaneswar: A passenger bus caught fire while being parked at Baramunda bus terminal in the city this afternoon.

No one was injured in the fire mishap in the bus which runs between Bhubaneswar and Mukhiguda.

Eyewitnesses saw smoke emanating from the bus named ‘Chakadola’ at around 1.45 pm. “The fire engulfed the entire bus within a few minutes. Luckily there were no passengers inside the bus during the mishap,’ said an eyewitness. 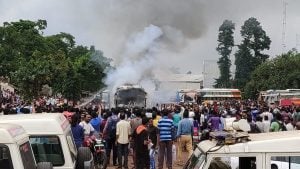 Three fire tenders were pressed into action to douse the flames. Fire officials said that they are further probing to ascertain the reason behind the fire mishap.

Panic gripped the bus terminal following the mishap. Other buses parked near the affected vehicle were shifted from the spot along with the passengers.