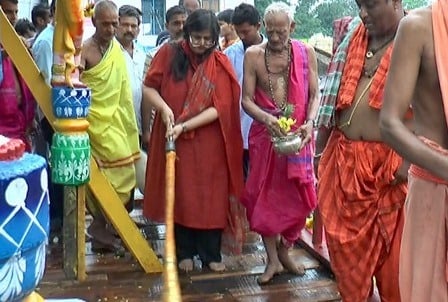 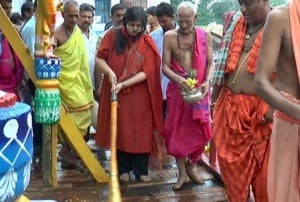 Paralakhemundi: Kalyani Devi, the daughter of Paralakhemundi King Gopinath Gajapati Narayan Deb, on Sunday performed the holy ritual of Chhera Pahanra during the Ratha Jatra of Lord Jagannath and his siblings in Paralakhemundi of Gajapati district.

Devi performed the Chhera Panhara rituals on the majestic chariots of the Trinity – Taladhwaja, Debadalana and Nandighosh, as the king is sick and under medication at a private hospital in Bhubaneswar.

This is the first time in the history of Ratha Jatra that a daughter of any king performed the Chhera Panhara rituals while the king is alive.

The Chhera Panhara ritual is the ceremonial sweeping of the chariots by the king, which signifies that there is no distinction between the king and a sweeper.

The chariots of the Lords are pulled to the Mausi Maa Mandir only after the completion of the Chhera Panhara rituals.