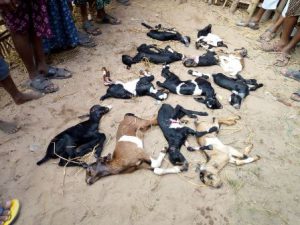 Berhampur: Reliving the bitter memory of Niali sheep killing which left the people of the State in a state of panic early this year, at least 12 goats were found dead at a resident’s cattle shed in Kholadi village under Sanakhemundi police limits in Ganjam district on Monday.

The resident Bhagaban Dora came across the disturbing scene after visiting his cattle shed early this morning. He found the goats lying dead inside the shed, with injury marks all over their body suspected to be inflicted by wild animals.

Dora immediately called up Digapahandi Forest Range, which arrived the spot with a tam of Veterinary doctors. The medical team suspected it to be a handiwork of wild animals after taking into account the pattern of killing and modus operandi of the predator.

The incident has left the villagers in a state of panic.