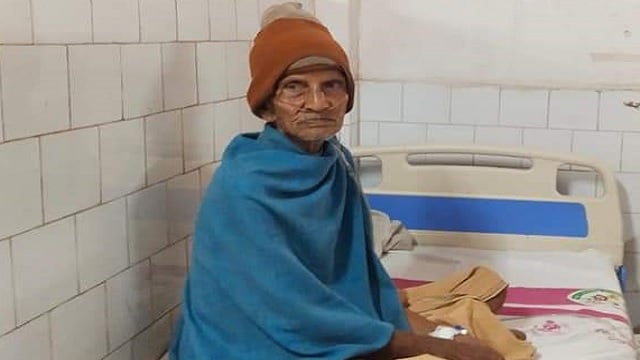 Jajpur: Padma Shri awardee Nanda Prusty was admitted to Tata Steel Medica Hospital in Duburi of Jajpur district on Monday. Reportedly, he has undergone electrocardiogram (ECG) and X-ray tests. His condition is said to be stable and doctors are constantly monitoring his health.

Padma Shri awardee and centenarian teacher Nanda Prusty admitted to hospital in Odisha’s Jajpur district. Prusty has been ill for the past month and is suffering from fever, cough and other old-age ailments, says doctor at the district hospital.

Earlier on Sunday, Padma Shri awardee Nanda Prusty was admitted to the Sukinda Community Health Center (CHC) in an emergency due to health issues and later shifted to District Headquarter Hospital (DHH) as his health condition deteriorated.

On Monday night, he was again shifted to Tata Steel Medica Hospital for further treatment and is undergoing treatment in a specially arranged cabin.

He has been ill for the past month and is suffering from fever, cough and other old-age ailments, added reports.

The centenarian is a resident of Kantira village in Sukinda block.

It is pertinent to mention that, his son Ganeswar Prusty was allegedly beaten up by two youths over a land dispute a day ago. Ganeswar was returning home after buying medicines for his father from the local market when the incident took place on Sunday afternoon. The two youths also threatened to kill Ganeswar.

A case has been registered and an investigation is underway. However, there is no mention of any attack or threat on Nanda Prusty in the complaint.

Nanda Prusty, popularly known as ‘Nanda Master’, was honoured with Padma Shri on November 9 for his long contribution in the field of in Literature and Education as well as Social Service.

He had to discontinue his studies post Class 7 and has been on a mission to wipe out illiteracy from the society since then. He has been teaching children and adults of Kantira and nearby villages free of cost in a temporary shed for decades.