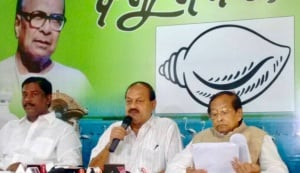 Bhubaneswar: The ruling BJD in Odisha will launch a week-long statewide protest over the central Government’s recent decision to increase the Minimum Support Price (MSP) for paddy by a mere Rs 80 per quintal for the year 2017-18.

Addressing to a press meet here on Saturday, senior BJD leader Debi Prasad Mishra said, “BJD will stage demonstration at all the 314 Blocks in the state from July 10, which will end on July 18, protesting the Narendra Modi Government’s recent decision to hike the MSP for paddy by a mere Rs 80 per quintal.”

“During the 2014 general election, the BJP had promised to double the MSP for paddy based on the recommendation of the Swaminathan Committee. However , the Narendra Modi government has betrayed the people of the country in general and farmers in particular after coming into the power,” Mishra said.

The party also reiterated its demands to raise the MSP for paddy to Rs. 2930 per quintal.

“During the last session of Odisha Legislative Assembly, the Government of Odisha had passed a unanimous resolution to increase the minimum support price for paddy to Rs 2930 per quintal. A House Committee was formed to submit and discuss the said resolution to the Prime Minister. But unfortunately, PM Modi didn’t give any time to meet the House committee,” Mishra claimed.

The BJD Krushak Cell, the farmers’ wing of ruling BJD in Odisha, on Friday staged a two-hour-long dharna in front of Raj Bhavan, on the issue of MSP for paddy crops,  and  submitted a memorandum to the President of India Pranab Mukherjee through the Governor of the state SC Jamir, requesting to intervene in the issue.

The Union Government had recently decided to increase the minimum support price for paddy by only eighty rupees i.e. from Rs 1470/- to Rs 1550/- per quintal for the year 2017-18.