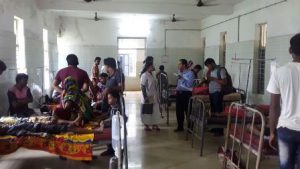 Baliapal: In a case of suspected food poisoning, over a hundred students were taken ill after consuming food served during a Ganesh Puja feast at Nityananda Saraswati Vidya Mandir at Nuagaon village under Baliapal block in Balasore district on Friday. The condition of the sick students, shifted to various hospitals in the district, is stated to be out of danger following treatment.

The incident occurred on Friday afternoon when the school was busy with puja on the occasion of Ganesh Chaturthi. A feast was organised after the puja in the school premises where hundreds of students, including school staffs, had their lunch. But soon after taking their meals, over a hundred students and the headmaster of the school developed symptoms like head reeling, nausea, vomiting and loose motion spreading panic in the area.

Some of the sick were shifted to Baliapal IDCO Community Health Centre (CHC) by the locals as their condition deteriorated. The rest of the students were taken to the Nuagaon Multipurpose Cyclone Shelter and were treated by a team of doctors from Balasore District Headquarters Hospital (DHH) which was rushed to the spot following the incident.

The condition of the sick students and the Headmaster is stated to be stable and they are showing improvement following the treatment, according to hospital sources in Baliapala IDCO CHC.

Meanwhile, a probe has been ordered into the incident by the district collector and food inspectors have been told to examine the food sample.