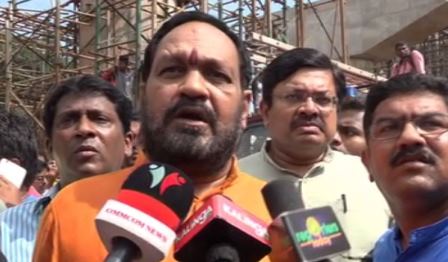 Bhubaneswar: A political blame game over the Bomikhal flyover collapse began within hours of the tragedy with the opposition parties – BJP and Congress – accusing the Odisha government and planning to raise the issue in the ongoing monsoon session of the state Assembly.

Panda said that Chief Minister Naveen Patnaik should come out of AC rooms and review the progress of the ongoing projects or else tragedy of this kind is sure to happen again.

“It is very unfortunate that this tragedy took place. Poor quality of work is the only reason behind the mishap. Work was going on even on Sunday, a holiday. It is an example of the low quality of work going on in the state. If the CM reviews the progress of work sitting in the AC rooms, this kind of tragedy will definitely continue to take place. He should free himself of the responsibility on moral grounds and give the charge of PWD to a good person. Action should be taken against those who are guilty. We will raise the issue in the state Assembly tomorrow,” said the President of thr Odisha unit of the saffron party.

Leader of Opposition Narasingha Mishra said that the grand old party will raise the issue in the Assembly and demanded criminal case against the guilty.

“Proper investigation should be conducted to find out whether it was a tragedy or a murder and stringent action must be taken against the accused. Criminal case should be registered against the guilty. The Congress party will raise the issue in Assembly,” said Mishra after meeting the injured in the Capital Hospital.

While a man identified as Satyabrata Patnaik (40) of Jharpada was killed, over 20 others, including the minor daughter of Patnaik, were injured as a portion of an under construction flyover at Bomikhal collapsed earlier today.