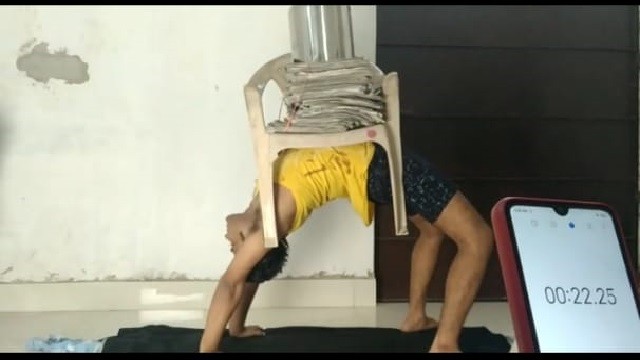 Jajpur: Soumya Ranjan Raut, the only son of Manoranjan Raut and Ranjita Raut of Muraripur village under Dasarathpur block of Jajpur district, has set a new India Book of Records.

Soumya Ranjan scripted the India Book of Records for keeping 30 kilograms of weight on his body. He kept the weight of 30 kilograms on his body in Chakrasana position for the longest period of time of 22 minutes and 25 seconds.

Soumya Ranjan used to practice for the record by doing yoga, exercise, and Chakrasana.

After graduating from College, Soumya Ranjan took an active part in student politics. He worked with several organizations as a social worker until he was posted as the president of Udhar Foundation’s Jajpur district unit.

Although he was born in a poor family, he has reached this stage of life today because of his strong spirits and willingness, he said in his reaction.

After Soumya Ranjan Raut was included in the India Book of Records, there was a wave of joy in the entire Dasharathpur block and Jajpur district.

Meanwhile, several people including the representative of Bingjharpur MLA and spokesperson of State ruling BJD party Pramila Mallik, Pradeep Kumar Mohanty met Soumya Ranjan and congratulated him for his achievement.

Foreign-bound Indian nationals can get Covishield second dose in Odisha