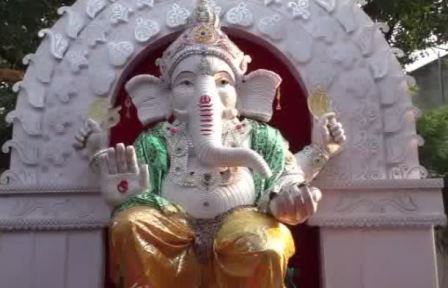 Jharsuguda: A statue of Lord Ganesh in Odisha’s Jharsuguda district has entered the India Book of Records for its eco-friendly nature.

The 13-feet tall eco-friendly Ganesh statue was made of around 25,000 pieces of water-proof paper and 15,000 Diamond Bits. No chemical colours were used to paint the statue.

Members of Friends Club, which was in charge of the puja celebration, had also made the puja pandal eco-friendly in a bid to create awareness among the people about keeping the surroundings clean and preserve them.

“It is a matter of great pride for us, the members of Friends Club, that we are in India Book of Records. Others and even we had made huge statues earlier by using clay and straw. But I think it is the first time in India that a 13-feet eco-friendly Ganesh statue was made using around 25,000 pieces of water-proof paper.  We never thought of creating history. Our aim was to create awareness among the public on avoiding pollution,” said Ajay Poddar, president of Friends Club.