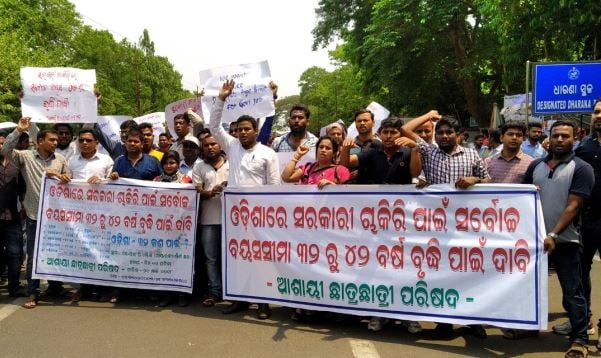 Bhubaneswar: Thousands of youths on Thursday staged a rally at the Mahtma Gandhi Marg in the city demanding to increase the upper age limit for all the government jobs in Odisha.

The job aspirants from across the state under the aegis of Asayi Chatra Chatri Parishad (Aspirant Students’ Council) took out the rally to press their demand to raise the upper age limit from 32 to 42 years while applying for all state level recruitments in government jobs.

“Telangana and Goa have set the upper age limit at 44 and 45 respectively. Similarly, Andhra Pradesh and Uttarakhand have increased it to 42 years. Other states like West Bengal, Haryana, Madhya Pradesh, Rajasthan, Uttar Pradesh and Tripura have set their age limit at 40 years,” said Girija Sankar Jena, convener of the Parishad requesting the Naveen Government to raise the upper age limit for the greater interest of the job seekers in the state.

“Around 2.6 lakh graduates are waiting for jobs after completing their graduation in 2016. If the State government doesn’t increase the age limit, we will intensify our protest at the district level in the days ahead,” he added.

Later on the day, a four member delegation of the protesting youths met the senior bureaucrats of Chief Minster’s Office (CMO) and submitted their charter of demand.

The state government may consider some relaxation in the upper age limit of job seekers, sources said.

Sushant Dhalasamanta to be shifted to Balangir jail