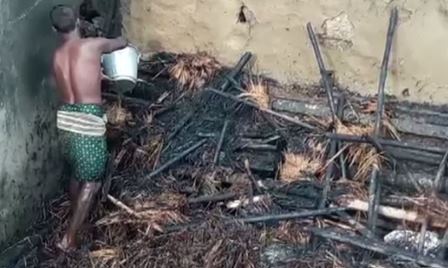 Kendrapara: A woman was charred to death after a major fire engulfed her thatched house at Deulipada village under Mahakalapada police limits of the district early this morning.

According to sources, Nisamani Das’ daughter Diptimayee Das was burnt alive after her house caught fire while she was asleep. The fire was so severe and spread so quickly that Diptimayee was unable to escape the flames. The reason for the fire, however, is still to be ascertained.

Fire tenders from Mahakalapada rushed to the spot and doused the flames.

Police have started an investigation into the mishap and sent the woman’s body for postmortem, sources said.