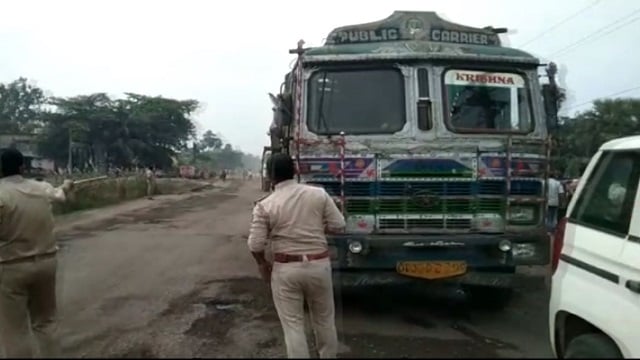 Dhenkanal: In a tragic incident, a wife was killed and her husband & son reported critical after a coal laden truck hit their bike in Etapa square on Highway number (NH) 55 under Kantabania Police station limits here  in Odisha today.

The deceased has been identified as Manorama Mishra of Banabaspur under Gandia  police station limits and husband as Subash Chandra Nanda.

According to reports, Subash along with his wife Manorama and son was going from Barapala to his in-laws house in Dhalapur by riding a bike to perform Shradh on the occasion of Mahalaya.

While moving through Etapa square, a coal laden truck reportedly hit Subash’s bike from behind. As a result Manorama died on the spot and Subash and their son sustained critical injuries.

After being informed, the local police reached the spot and rushed Subash and his son to Meramandali hospital for treatment in a critical condition, said sources.

Besides, the police have also seized the coal laden truck.

It is to be noted that in a similar incident on September 19, a cow laden truck hit a bike in Balasore district and as a result a man was killed while his wife and son sustained critical injury. The accident took place near Basta Chhak in Balasore.