Subarnapur:  The Tarava Police Station in Subarnapur District has been adjudged as one of the 10 best police stations in the country in the Annual Ranking of Police Stations for the year 2018.

Police DG R.P Sharma today handed over the certificate and memento to Debi Prasad Dash, SP Subarnapur and Dulamani Bhoi, IIC Tarava at State Police Hdqrs in Cuttack. Sharma congratulated both the SP and IIC for this excellent achievement. 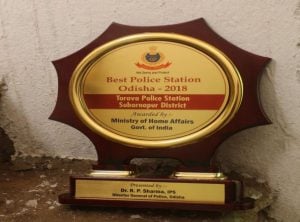 The certificate has been issued by the Ministry of Home Affairs. Earlier in the DGPs/IGPs conference–2016, it was decided to award 10 best performing police stations of the country on the basis of their performance on various angles. 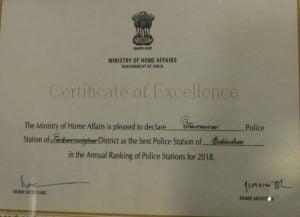 A team from Quality Council of India visited Tarava earlier and they interacted with the people in various cross-sections to finalise the best police station. They took input from the general public, women, and people in the SC, ST and minority community in this regard for taking a final.