The championship is being organised by the Odisha State Badminton Association in collaboration with the Department of Sports and Youth Services.

BJD MLA and President of Odisha State Badminton Association Shri Rohit Pujari inaugurated this championship today in presence of dignitaries from the Department of Sports and Youth Services.

Speaking on the occasion Pujari said that such type of championship will surely encourage the youths of Odisha more in Sports. He further said by organizing such an event we want to make skilful our young sports achievers and preparing them for National and International level competitions.

Address the gatherings renowned player of Odisha, Kamal Das mentioned that the arrangements made are of high standards and a record number of entries have been received this year. 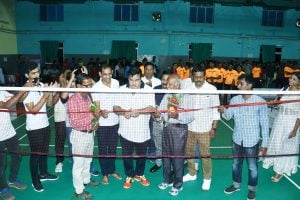 The championship has been organized in Under 13, Under 15, Under 17 and Under 19 boys and girls as well as senior and veteran groups as per Badminton Association of India (BAI) guidelines. The tournament includes single, double and mixed double categories. The championship will be conducted in two rounds i.e. qualifying and Final round.

All the matches for Under 13, Under 15, Under 17 and Under 19 years boys and girls have been organized today while matches for seniors and veteran groups will take place on Friday.  Only registered players of Odisha State Badminton Association are eligible to participate in this mega sporting event.