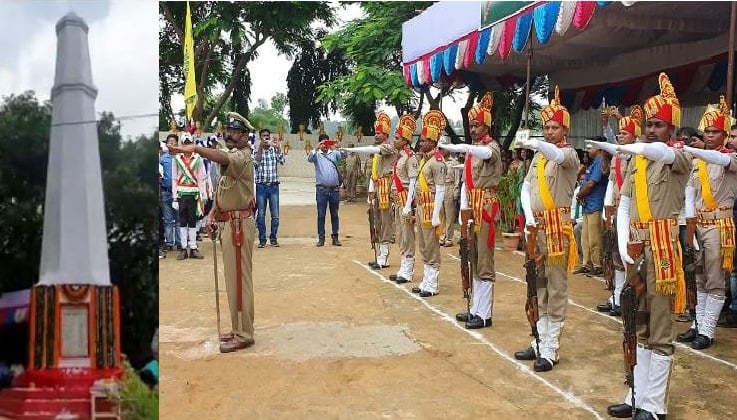 Nabarangpur: Rich tributes were paid to the martyrs of India’s freedom struggle at Papadahandi in Odisha’s Nabarangpur district on Saturday.

Every year, the District Administration organises ‘Shaheed Diwas’ to pay homage to the 19 freedom fighters, who were gunned down by the British police forces on the Turi river bank near Papadahandi on this day of August 1942 during the Quit India Movement.

Thousands of people including political leaders cutting across party line came together to pay tribute to the martyrs near the river bank on the occasion.

Earlier today, a torch rally in memory of the martyrs was taken out from Papadahandi village to the Saheed Minar located on the banks of Turi river. A special puja was also conducted on the river bank to pray for the martyrs. On 24 August, 1942, British police opened fire on freedom fighters at the Turi river bridge without giving them any prior warning while the latter were marching towards Papadahandi to attend a meeting on Gandhiji’s call for a Quit India Movement.

Eleven persons died on the spot and eight others succumbed at the Nabarangpur hospital later. Hundreds of innocent people jumped into the river out of fear and got injured.

The incident has been marked as the biggest massacre by the British police, next only to the Jallianwala Bagh massacre during the freedom movement of India.

Woman Dies After Falling On Road During Snatching In Odisha