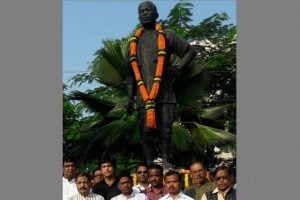 Bhubaneswar: The people of Odisha on Wednesday paid rich tributes to martyr Laxman Nayak on his 118th birth anniversary. The SC and ST Minister Ramesh Chandra Majhi offered floral tribute to the tribal leader at his statue in the Adivasi exhibition ground here this morning.

Political leaders from different parties and people from different walks of life also paid floral tributes at the statue of Saheed Laxman Nayak in the city and various places across the state.

A series of functions have been organised to highlight the contribution of Saheed Laxman Nayak during the freedom movement of India. The State Government would organise a special programme at Jaydev Bhavan here in the evening to celebrate the birth anniversary of the martyr.

Born on November 22, 1899, in Tentuliguma village of the Koraput district, Nayak was a cult figure among tribals in Southern Odisha. He had raised his voice against the British rule for the rights of the tribal people as they were treated very badly by the government officials and police.

Getting the call of MK Gandhi, Nayak led a procession on August 21, 1942, demonstrating against British rule in front of Mathili Police Station. However, the brutal police officers open fired on the protesters killing 40 and hundreds were injured.

The British administration implicated Nayak in a case of murder, and the death sentence was pronounced on him on November 13, 1942. He was hanged on March 29, 1943 in Berhampur Jail.