Odisha: Pick up van and truck collide head on in Boudh, 2 critical

2 people have been severely injured in an accident between a pick up van and a truck in Boudh district of Odisha. 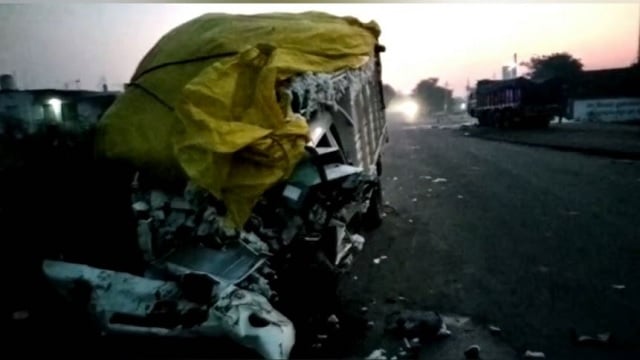 Boudh: In a dreadful incident, an accident occurred on national highway number 57, near Baghanadi chhak, which is under Baunsuni police limits in Boudh district of Odisha. The accident occurred late last night at around 2 AM. A cotton loaded pick up van, and a truck got into a head on collision. The driver and helper in the pick up van were critically injured due to the accident.

baunsuni fire department reached the place of incident and and spent nearly two hours trying to rescue them with the help of a cutter. Both of them were rushed to the Baunsuni medical.

The two people who have been injured have been identified as Keshab Katuala, and Tarun Meher. They belong to Gangasagar Palamala village in Patnagada block. They have been referred to the Sonpur medical as their condition deteriorated.

the cotton loaded van was enroute Balangir, while the truck was going from Sonpur to Boudh. The two vehicles collided near Baghanadi chhak. The front portion of the pick up wan has been completely destroyed.

The truck driver is absconding. Baunsuni police has reached the place of incident and started the preliminary investigation.