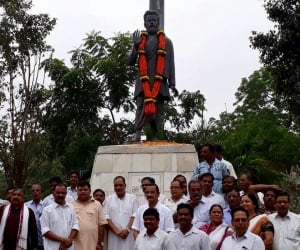 Bhubaneswar: The people of Odisha on Saturday remembered Utkalamani Gopabandhu Das on his 89th death anniversary.

Chief Minister Naveen Patnaik and some of his cabinet colleagues offered floral tributes at the statue of Gopabandhu  at the Secretariat premises here this morning.

Senior BJP leader and Union Minister Dharmendra Pradhan and Odisha PCC President Prasad Harichandan, along with their respective party leaders and activists, also paid floral tributes to Ulakalamani at his statue at Gopabandhu Square here in the capital city.

Leading Odia daily “The Samaja”, founded by Utkalamani Gopabandhu Das, has organised various programmes to pay rich tributes to the renowned freedom fighter, social reformer and journalist of the state.

Besides, a number of functions are being organised by the government and various private organisations across the state to mark the occasion.

Born on 9 October 1877 to Swarnamayee Devi and Shree Daitari Das, at Suando Village near Puri, Gopabandhu was an esteemed social worker, reformer, political activist, journalist, poet and essayist. He was known as Utkalamani (Gem of Odisha) for his outstanding contribution to the people of Odisha. He passed away on this day in 1928.