Odisha Panchayat Polls: Physical deficiency not a hindrance for this candidate 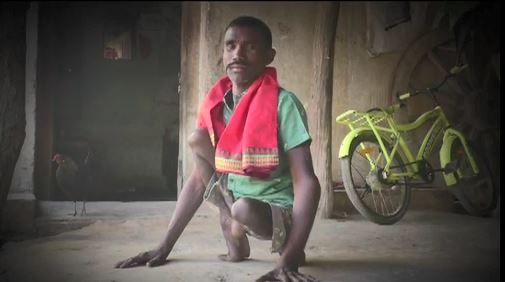 Bargarh: This 3 tier Panchayat Poll in Odisha has witnessed certain unusual but encouraging happenings. This time candidates for different posts of the election have not only come from the higher section of the society or belong to the wealthy class. Rather a good number of candidates have become inspiration for others as they have come up to serve people despite their deficiencies.

Meet Saroj Bariha from Padampur area in Bargarh district of Odisha who has contested for the post of Zilla Parishad candidate for the Gaisilet Zone 1 in the district.

Physical deficiency is not going to stand as a hindrance for those who are physically challenged but have strong will power to serve people, says Saroj.

By profession, Saroj is a cycle mechanic. He earns his livelihood by mending bicycles of people. It has been learnt that he uses to repair bicycles of children free of cost. He wants to set an example of social work if he wins, according to him.

After getting sanctioned the election symbol, he has been seen seeking vote by moving from door to door in the village. This time many candidates have adopted digital mode for campaign in the wake of the pandemic. However, Saroj does not have financial capacity for this. And hence he has banked on door to door campaign. Fortunately, in lieu of his effort, many people have come up in his support.