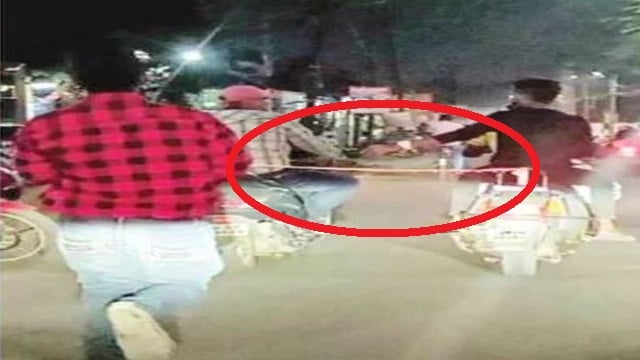 Cuttack: In a shocking incident, two youths in Cuttack have tied a man with a rope behind a bike and dragged him on the main roads of the city.

The astonishing fact is that allegedly, the youths have resorted to this typical movie – scene style inhuman act because the man did not pay up a debt that he owed to one of them.

According to reports, the incident has taken place in the busy Chandi Mandir area of the Silver city of Odisha.

Reportedly, the locals who tried to save the man were given death threats by the two youths who were involved in this inhuman act.

No complaint has been lodged in this regard in any of the nearest police stations. Cuttack DCP Pinak Mishra, has however taken note of the act.

He has said that the police is yet to receive any written complaint in this regard. The truth of the matter in question will be verified after the police conducts a thorough investigation in this case.

The DCP has ordered a detailed probe into the matter. He has assured that, the CCTV footage will be verified and evidence will be collected and the two youths involved in  the above stated inhuman act shall be arrested at the earliest.

It is noteworthy that, the identity of the youths and the man involved in this case is yet to be ascertained.