Odisha: Man awarded 20 years jail term for rape of minor girl who is now his wife 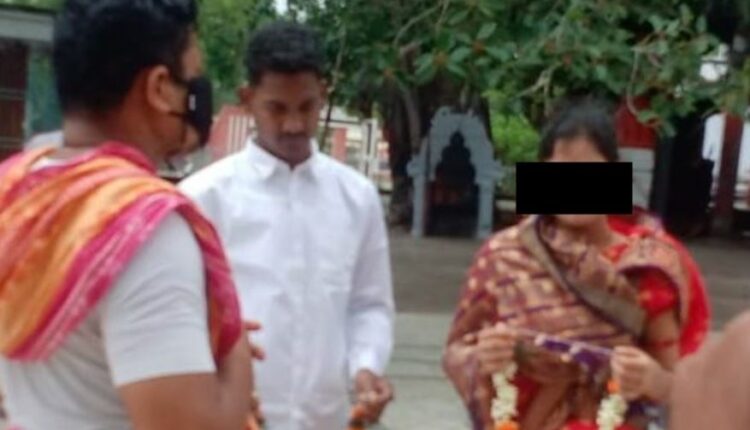 Angul: In an unusual happening, a man has been awarded with 20 years of jail term recently in the charge of raping a minor girl, who is now his wife. The incident took place in Banrapal Police limits in Angul district of Odisha.

The couple had gone to the Court today together. Yet, from the Court the man was taken to jail while the woman returned home alone, without husband.

As per reports, when the girl was a minor once she was alone at home when Gobardhan Naik of the village had entered her home and raped her.

Her parents had died earlier. Later, as the minor girl threatened the youth to reveal about the crime to all, the accused promised her to marry after some day. However, later he denied marrying.

Hence, the maternal uncle of the victim girl had lodged an FIR at Banrapal Police Station. Police arrested the accused but later in August that year he managed to get the bail. Meanwhile his mind also changed. He realised his guilt. Accordingly, he took decision to marry the victim girl and later actually married the girl. The marriage was held first in the temple and later in the Registry office with mutual consent of both the parties. Since, then they were happily living as husband and wife.

However, their happiness did not last long. A rape case was pending against the accused under POCSO Act. Accordingly, the first track Court of Angul on October 31 issued the verdict of 20 years Rigorous Imprisonment for the man. The decision was issued after examining 23 witnesses and circumstantial evidence. Later he was sent to jail. Now, his wife has become helpless. Her life has been changed following this order by the court.

Earlier she had lost her father and mother. And after marrying the accused, now she again became alone. After hearing order of the Court in the Open Court she cried. As her husband has been awarded with 20 years rigorous imprisonment now there is no certainty on when and he will come.

Of course, senior advocates have said that the punishment has been awarded under the POCSO Act. But if appealed, he will get relief in the upper court. Even the years of punishment will also lessen. Let us see what the victim is doing.

New Hero Xpulse 200T teased ahead of its launch, might get various updates

Significant increase in Gold rate in India recorded on November 3