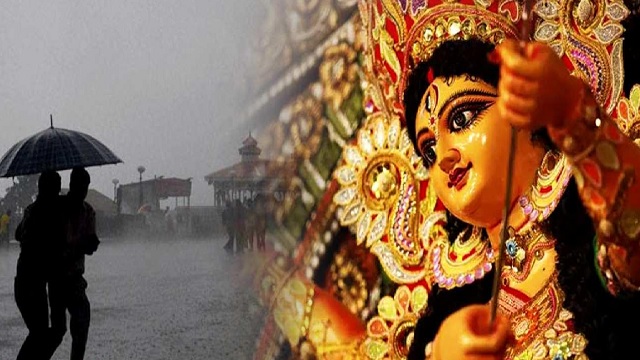 Bhubaneswar: Odisha is most likely all set to experience a wet Durga Puja this year as the Regional Meteorological (MeT) Centre has predicted rains.

Rain in Odisha is likely to increase from September 27 said the Regional Meteorological Centre situated here in Bhubaneswar in its latest bulletin.

Heavy rainfall is very likely to occur at one or two places over the districts of Gajapati, Ganjam, Kandhamal and Puri from September 27. The Regional Meteorological Centre here has issued a Yellow Warning for these districts.

It is noteworthy that, as many as two cyclonic circulations may form over the Bay of Bengal within the next 13 days, as per the ‘North Indian Ocean Extended Range Outlook for Cyclogenesis’ issued by the India Meteorological Department (IMD).

It is noteworthy that the Durga Puja preparations have started in full swing all over Odisha. The artisans across Bhubaneswar and Cuttack are busy in giving final touches to the idols.

According to reports various hi-level meetings, discussions are being held across the twin cities regarding repairing of roads, uninterrupted electricity and drinking water. Focus was also given on how to celebrate the Puja peacefully and for the smooth immersion of the idols after festival.