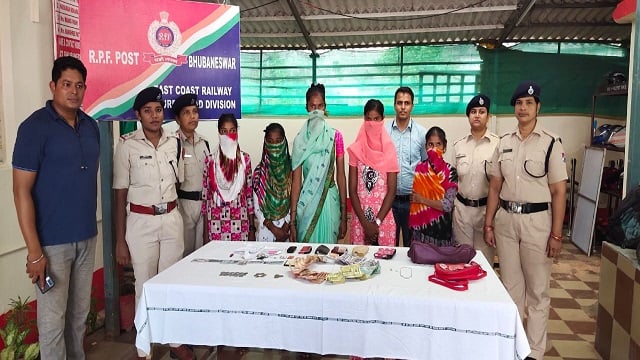 Bhubaneswar: As many as 6 members of a woman looters’ gang have been arrested by the Railway Protection force (RPF) from the Bhubaneswar railway station here in the Capital city of Odisha today.

The identity of the accused is yet to be ascertained.

According to reports, the accused were allegedly looting passengers from the railway station. Besides, they were also stealing in the train, said sources.

The Railway Protection Force has seized vanity bags, gold chains, mobile phones and other stolen items from their possession.

In the meantime the (RPF) has initiated a probe into the matter to nab the other members of the looters gang. Besides, the arrested accused are being questioned for their robbery.

In a similar incident on September 21, as many as four members of a looters’ gang were arrested by the Cuttack Sadar police. As per reports, one of the arrested members of the gang was a notorious professional criminal and had FIR registered in many police stations of the district.

People formed a queue behind a mannequin left at the ATM, watch video!

India to add 80 airports in next 4-5 years; new rules for aerodromes