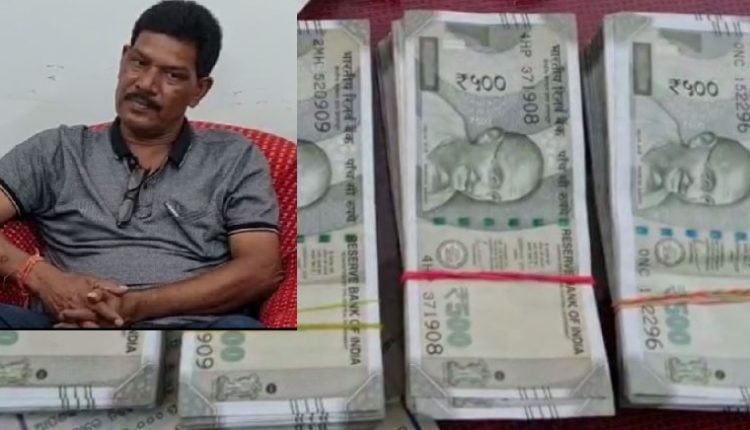 Bhubaneswar: Tightening the noose around corrupt government officials the Odisha Vigilance on Tuesday intercepted the IIC of Bangomunda Police Station in Balangir district near Bargarh Toll Gate, while he was plying from Bangomunda towards Kuchinda.

The police personnel has been identified as Binod Bihari Nayak.

As per reports, on receipt of reliable information regarding collection of huge cash by Binod Bihari Nayak, Inspector-in-charge, Bangomunda Police Station, Dist: Bolangir as illegal gratification from different sources, a team of Odisha Vigilance kept a close watch over his movement and activities.

Accordingly, today the team of Odisha Vigilance intercepted him in the evening near Bargarh Toll Gate, while he was plying from Bangomunda towards Kuchinda on a Maruti Ciaz car bearing registration No.OD-15-K6111.

During interception, a sum of Rs.2,06,220/- (Rupees Two Lakhs Six Thousand Two Hundred Twenty) was recovered from Nayak, IIC, which he could not account for satisfactorily.

The cash as well as other documents including Maruti Ciaz car have been seized.

The investigation of the case is in progress.

In another case the Vigilance sleuths arrested another cop in the State. As per reports, the Constable of Rusuda Outpost, Bheden Police Station in Bargarh district was arrested while accepting Rs.7,000/- bribe.

In one more Vigilance Operation today, Ranjan Pradhan, Constable No.98, Bantala Police Station, Dist-Sambalpur has been apprehended by Odisha Vigilance for demanding and accepting undue advantage (bribe) of Rs.7,000/- (Rupees Seven Thousand) from a complainant in order to favour him in a civil dispute matter.

Being threatened with arrest by the Constable, the complainant contacted the Toll Free No.1064 of Odisha Vigilance. Following due verification, a trap was laid on 30.11.2021 wherein the accused Ranjan Pradhan, Constable was caught by the team of Odisha Vigilance at Bhatupali chowk under Rusuda Phandi, Dist-Bargarh, while demanding and accepting undue advantage (bribe) of Rs.7,000/- (Rupees Seven Thousand) from the complainant.

The bribe money was recovered from the possession of Pradhan and seized in presence of witnesses. Both hands wash of Pradhan as well as pant pocket wash gave positive chemical reaction, confirming acceptance and handling of bribe money by him.

Following the trap, simultaneous searches have been launched on the residential house of Pradhan at Janaha Pada, PS-Attabira, Dist-Bargarh and Rusuda Out-post, Dist-Bargarh. He has been arrested and will be forwarded to the Court.

In this connection, Sambalpur Vigilance P.S. Case No.41 dated 30.11.2021 U/s 7 Prevention of Corruption (Amendment) Act, 2018 has been registered and is under investigation.

In the case of the Constable of Berhampur Police district he was arrested by Vigilance for disproportionate assets (DA) worth Rs 1,69,68,920/-.

On the allegation of possession of assets disproportionate to the known sources of income by Sudarsan Pradhan, Constable No.742, Berhampur Police District, posted at Bijipur TOP under Berhampur Town PS, simultaneous house searches were conducted at 3 places in Ganjam district on 29.11.2021 by 3 teams of Odisha Vigilance led by 1 Addl. SP, 2 DSsP, 5 Inspectors and other staff on the strength of Search Warrants issued by the Court of Special Judge, Vigilance, Berhampur.

1 triple storeyed building at Lochapada, Berhampur, 3 nos of newly constructed buildings at Nimakhandi, Berhampur, 9 plots at Lochapada, Nimakhandi and Tumbagada in Ganjam district, 2 nos of two wheelers, cash of Rs.5,16,880/- and other movable and immovable properties, all totalling to over Rs 2.16 Crore have been unearthed during the house search.

After thorough search, inventory and further enquiry, the income, expenditure and assets of Sudarsan Pradhan were calculated and he was found in possession of assets disproportionate to the known sources of income to the tune of Rs.1,69,68,920/- (Rupees One Crore Sixty-nine Lakh Sixty-eight Thousand Nine Hundred Twenty) which constituted 174% of his known sources of income.

As Pradhan was found in possession of disproportionate assets, which he could not account for satisfactorily, Berhampur Vigilance P.S. Case No.18 dt.30.11.2021 was registered against him and his spouse U/s 13(2) r/w 13(1)(b)/12 Prevention of Corruption (Amendment) Act2018.

In course of investigation, today Pradhan has been arrested and forwarded to the Court of Special Judge, Vigilance, Berhampur. The Court has remanded him to jail custody till 13.12.2021. Investigation of the case is in progress.