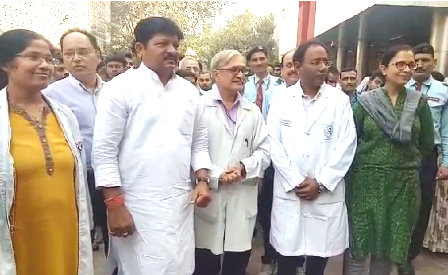 Jena met the twins at ICU department of the hospital in the presence of Chief of Neurosciences Centre, AIIMS, Dr. Ashok Kumar Mahapatra.

The Minister also held discussion with the hospital team which is looking after the twins and asked about their health condition.

The twin’s mother Pushpanjali Kanhara also met them for the first time after their second phase operation.

The AIIMS authorities had yesterday informed that the babies were stable and doing well. They are still in ICU and a team of 15 Consultation, 10 Resident and several Plastic Surgeons, looking after them under the supervision of Professor Ashok Kumar Mahapatra and Dr. Deepak Kumar Gupta.

Their breathing is good and hemodynamically stable, informed the hospital authorities.

The press release also revealed that Jaga is showing response to some command and on Dialysis to support his compromised kidney function. Their condition is likely to improve slowly in the next 15 days and doctors expect that they will be in the ICU for 7-10 days or longer depending on the need.