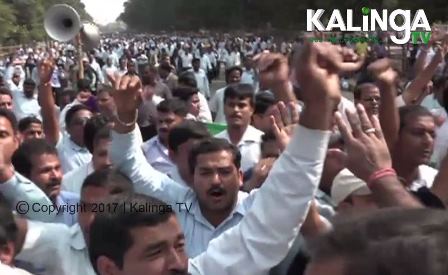 Bhubaneswar: In a major relief to the Gana Sikshyakas, Odisha government has decided to regularize as many as 18,414 of them in the state.

According to a letter issued by the School and Mass Education Department, the state government has decided to regularize 18,414 out of the 22,152 Gana Sikshakas who fulfill all the criteria.

As per a decision taken in 2016, the services of those Gana Sikshyakas will be regularized who have already completed eight years of service since their appointment and have undergone training (CT or BEd).

“You are requested to take steps to display the list of eligible Gana Sikhyakas who have fulfilled all eligible criteria in respect of your district in your office notice boards by 24th of August, 2017 positively and to invite any objection from the stakeholders in this regard within 22nd of September, 2017,” said the School and Mass Education Department in a letter to all the District Project Co-ordinators.

“Objection received in this regard may be scrutinized at your level & decision may be taken therof as per this Department Resolution No. 14467/SME dtd 25.07.2016 & Notification No. 25290/SME dtd 22.12.2016. Any changes in the list may be sent to this Departmet through the Director of Elementary Education, Odisha by 25th September, 2017,” added the letter.

A trained Gana Sikshyak is drawing a salary of Rs 7000, but he would get around Rs 18,000 after the regularization.

Below is the list of the districts with their respective numbers of the eligible Gana Sikshyakas.

Violence In Name Of Faith Won’t Be Tolerated: PM