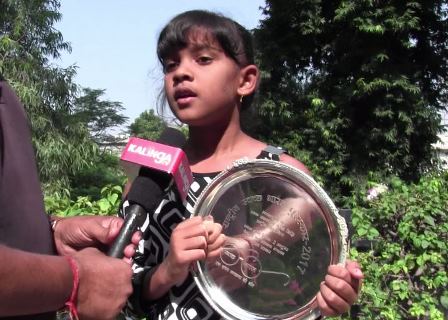 New Delhi: In a matter of joy and pride for Odisha, Siddhi Swayangita Sethi from Boudh won the first prize for a film on Swachh Bharat (Clean India) Mission campaign in the Under-18 category.

Sethi topped the list of 2.7 lakh contenders for her three-minute short film.

“I had prepared a short film on the importance of everyone joining the Swachh Bharat mission and keep their respective villages clean. My movie was selected among 2.7 lakh entries, for which I am very happy,” Sethi said speaking exclusively to KalingaTV.

She received Rs 1 lakh as prize money along with a citation and a certificate at a special function in New Delhi on the occasion of the Swachh Bharat Diwas yesterday.

When asked about the idea behind making the short film, the resident of Boudh said, “On my way to the school one day, I found the photograph of the Father of Nation Mahatma Gandhi and Prime Minister Narendra Modi on the road. I picked up it and wiped it with my dress and carried it to the school. Then, I decided not to throw anything on the road and dump everything in a dustbin instead. I also wanted to create awareness among others in this regard. Therefore, I made the movie.”

Since garbage cause different diseases, we should make use of the dustbins, she advised.