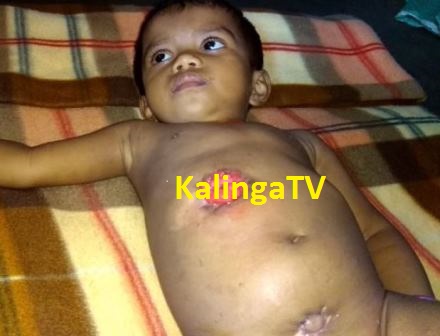 Daringbadi: Poverty has become a great challenge for a two-year-old girl child with imperforate anus of Raskua village under Bhramarbadi Panchayat in Kandhamal district. After second operation, now she is waiting for government support for her next surgery, without which her life would be at risk.

According to reports, Naresh Pradhan and Baijanti Pradhan of the village were blessed with a baby girl having imperforate anus on August 3, 2015.  After noticing the disorder, they took the baby to Berhampur for treatment on the following day of her birth, where doctor conducted a surgery on her on emergency basis to remove the waist materials from the child’s abdomen. She was brought back to home after a month.

However, her urination stopped after some days, following which she was again rushed to the hospital. A second operation was conducted and two bypasses were fixed on her body for urination. Doctor had asked the Pradhan family to conduct the third surgery after one and half years.

“A day after my daughter was born, we took her to Berhampur hospital and stayed there for a month as a surgery was conducted on her. Again we took her after two months. The doctor who had conducted the surgery said that the next surgery would be conducted after 18 months. When the day came we took her again to the doctor. But, he referred our child to Visakhapatnam,” said Baijanti Pradhan, mother of the child. 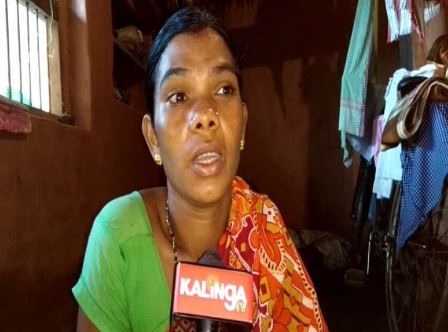 The minor girl is now battling for life as the parents of four children could not take her to Visakhapatnam as per doctor’s advice due to financial problem.

“Four to five times we took our daughter to Berhampur and Phulbani hospitals with the little money which I earned with much difficulty. Since now we do not have enough money for her treatment, her life is in danger,” said Naresh Pradhan, father of the child.

Meanwhile, locals have urged the government to provide financial assistance for the treatment of the child.

“The family did its best to cure the girl. However, they lack money for further treatment. The little money which the family earns as daily wage labourers is not enough even to meet their basic needs. They have no other means to get money to treat their child. Even they have not got an Indira Awaas and live in a thatched house. Therefore, government should provide some financial assistance so that life of the small child can be saved,” appealed Santun Pradhan, a neighbour of Naresh Pradhan.