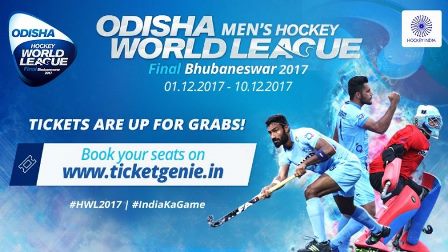 Speaking to the reporters, the DGP said, “The arrival of the teams for the Men’s Hockey World League-2017 will begin from November 22. We will look into the entire security arrangements from their arrival to departure. Security will be beefed up at all the hotels where the players will be lodged.”

“Food, water bottles and other undesirable or unwanted things will not be allowed inside the stadium as security of the players, officials and VIPs will be our topmost priority. Crowd regulation and their proper frisking will also be conducted,” he added.

Speaking about the traffic management and parking, the top cop of the state said that traffic management is a big challenge for the police. However, adequate traffic police will be deployed for the smooth traffic regulation during the matches. Only the pass holders will be allowed to park their vehicles on the stadium premises as there is limited space, he added.

Sharma also said that many private security arrangements will also be carried out during the mega event. They would see whether the owner of the valid ticket holders enter into the stadium.

Avoiding any possible deployment of police from other states, the DGP said, “Odisha police is capable enough to conduct the match peacefully and there is no need the help of police personnel from other states. We have learned many things by conducting international events including the Asian Athletic Championship this year. The Commissionerate Police will conduct patrolling to avoid any criminal activities during the hockey tournament.”

As many as ten teams including India will take part in hockey’s biggest event between December 1 -10. India will begin the tournament on December 2 against Australia.