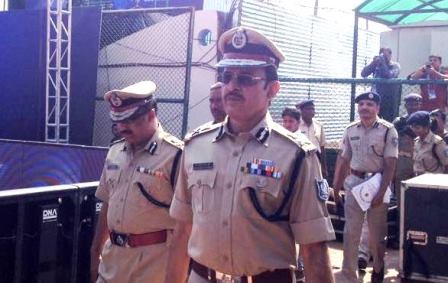 Bhubaneswar: With one day to go for the Hockey World League Finals, the Director General of Police (DGP) RP Sharma, on Thursday reviewed the security at Kalinga Stadium, the venue for the event. Twin-City Police Commissioner YB Khurania and Bhubaneswar DCP Satyabrata Bhoi were also present during the review.

A total of 25 platoons of police force will be deployed for the mega event which will continue till December 10. The Commissionerate Police (CP) had earlier issued a Traffic Advisory for smooth management during the tournament.

While hand bags, coins and water bottles have been banned for entry, the CP has issues details for vehicle parking to avoid any last-minute hassle.

Owing to the successful conduct of the Hockey Champions Trophy in 2014 and Asian Athletics Championship a few months back, Hockey World League Finals is the third major tournament which will be held at the Kalinga Stadium.

A total of eight teams will lock horns for the Gold medal in this tournament.

Here is the Traffic Advisory

Ground of Regional Institute of Education– All types of vehicles.

* Those coming from Raj Bhavan side are advised to park their vehicles at Behera Sahi Ground or Nicco Park Road.

* Those coming from CRP crossing side on NH-16 may park their vehicles at Nayapalli Ravan Podi Ground.

* Invitees with vehicle pass coming from any direction should proceed on NH-16 and enter stadium through Gate No. 9.

* Those coming in vehicles from Nandan Kanan side are advised to park their vehicles at Behera Sahi or Nicco Park Road.

* Those coming in vehicles from either Khandagiri side or Cuttack side on NH-16 are advised to proceed to Regional Institute of Education or Nicco Park Road via Acharya Vihar crossing to park their vehicles.

The spectators are not permitted to carry any baggage or objectionable articles such as match box, water bottle, cutting instruments etc with them inside the stadium.

All accreditation card/pass/ticket holders have been advised to carry their photo identity card such as voter ID or Aadhaar card with them for easy identification and verification, if required.