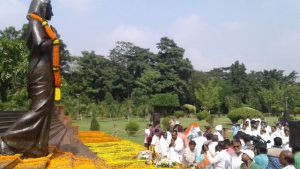 OPCC President Prasad Harichandan offered floral tribute to the former Prime Minister at her statue in the Indira Gandhi Park in the capital city. Party leaders and other dignitaries also attended the event.

Gandhi, the first female Prime Minister of India , was assassinated by her bodyguards on October 31, 1984, a few months after she had launched ‘Operation Blue Star’ to crush secessionist movement in Punjab and sent troops into the Golden Temple of Amritsar.