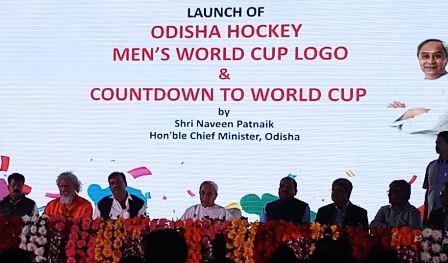 Bhubaneswar: Two days before the Hockey World League finals, Odisha Chief Minister Naveen Patnaik unveiled logo and mascot for the Hockey Men’s World Cup-2018 at Kalinga Stadium here on Wednesday. There are 364 days to go for the Hockey extravaganza. The India hockey team was present at the event.

Patnaik also launched the countdown timer for the international event scheduled to be held here from November 28 to December 16, 2018.

“I feel privileged to have unveiled the logo of Hockey World Cup. Few months back we had successfully hosted the Asian Athlectics Championships. Odisha is fast becoming a spotting destination,” the Chief Minister said.

As many as 16 countries including host India will participate in the 14th edition of the Hockey World Cup at Kalinga Stadium next year.